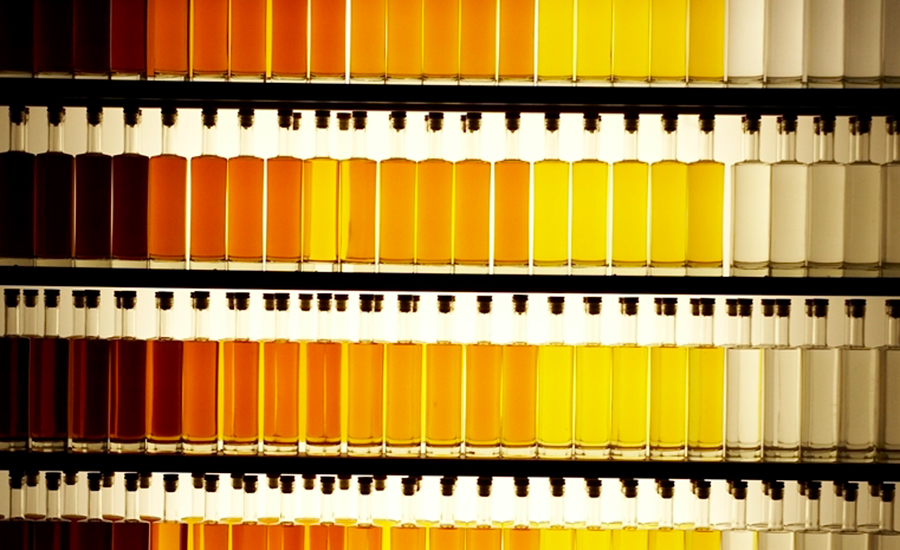 The first attempts to distil cognac are recorded in documentation in the area of the same name, dating from the 15th century. Cognac was a commercial metropolis for salt and wine and had ties with England, Scandinavia and the Netherlands. Given the high demand, a large quantity of wine was produced in the 16th century, although admittedly of a low quality. These wines could not survive transportation by ship and therefore people turned to distillation. Storing the distillates in wooden barrels gave them a more refined flavour, triggering the development of some big brands: Martell was founded in 1715 and Hennessy in 1765. To prevent any copies being produced, the borders of the region were defined by law in 1909. 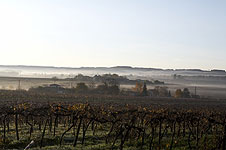 Hennessy, Rémy Martin, Martell and Courvoisier make up 80% of the market of which 80% is comprised of the VS sector. Rémy Martin dominates the fine champagne sector. This refers to blends (coupes) that are made from a mixture of Petite and Grande Champagne with the latter comprising at least 50%. Cognacs made using Petite and Grande Champagne have a long life. Distillates from other regions mature more quickly and are therefore better suited to use in younger Cognacs.

The established growing area of Charente around the town of Cognac is divided into 6 regions (crus):

Grande Champagne: in the region from Segonzac to the town of Cognac and on to Jarnac, the substrate is made from lime and chalk. The products have the greatest ageing potential and are only used in the best quality Cognacs.

Petite Champagne: forms a semi-circle bordering onto Charente in the North. The ground is similar to that in the Grande Champagne region although with a more maritime climate. The wines have less body.

Borderies: the smallest growing area to the North of Cognac is influenced by the Atlantic and by the loamy chalk-rich ground. These qualities mature very quickly and are therefore used for coupages in VS and VSOP qualities.

Bons Bois: distillates from this region mature very quickly and are often used to make Pineau des Charentes. This area surrounds those named above and has varied soil types and climates. 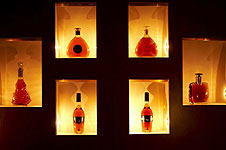 It is predominantly the Ugni Blanc (over 90%), Folle Blanche and Colombard grape varieties which are used in Cognac. The light and acidic base wines are distilled from November until 31 March of the following year. Depending on the variety and year, the alcohol content is between 7 and 11% vol., which produces a better concentration of flavour. A double distillation process is used (à repasse) in traditional stills (Alambic Charentais) with a maximum capacity of 18 to 25 hectolitres. No yeast or very little yeast is used to make the younger Cognacs whereas a greater quantity is used to make the more mature Cognacs. The base wine is heated and concentrated in a specially built vessel. The steam is channelled on to the spirit pipe (swan-neck), which usually passes through a pre-heater. This heats the wine to approx. 40 degrees Celsius.

The steam then condenses in a cooler and the first distillate (brouillis) begins to trickle from the separator with around 28 to 32% vol. The second distillation (bonne chauffe) is around 70 to a maximum of 72% vol. The result is a refined spirit and the heart (Le Coeur) is separated from the heads (Têtes) and tails (Queues) and processed further depending on the concept involved. After this, the maturation process begins in barrels in order to derive the gold-coloured end product from the water-clear distillate (Eau-de-Vie). 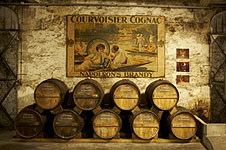 The containers are made from Limousine or Tronçais oak with a capacity of up to 350 litres. Up to 30% of the new harvests are usually placed in new containers. Some companies use exclusively new wood and in this case only XO qualities and above are released onto the market. Some of the distillate evaporates during maturation in the barrels - the so-called 'angel's share'. The maximum storage time is 50 to 60 years, during which time the alcohol reduces to approx. 40% vol. Afterwards, the Cognac is placed in glass containers in store chambers (known as 'the paradise'). In the case of the younger Cognacs, the alcohol is diluted down with a mixture of mature Cognac and water (approx. 20% vol.). The required drinking strength is then achieved in stages (Petites Eaux or Faibles) - i.e. from 40 to a maximum of 45% vol. Any product falling outside of these values may not be labelled as Cognac but rather as Eau-de-Vie.

Cognac is usually a blend (assemblage) of distillates from different regions and years. The addition of sugar colouring for colour and sugar to complete the product is permitted as are bonificateurs (extracts from oak wood chips, plums, green walnuts or roasted almond husks). In addition to blends, a wide range of distillates from different varieties or regions are also produced (single barrels) which reflect the character of their domain. Millésimes are rare in Cognac. There may instead be barrels of individual varieties or blends. If the quantity exceeds a barrique or single barrel, the term used is a 'single batch' whereby several barrels are filled with the same quality.

The 'Bureau National Interprofessionnel du Cognac' (B.N.I.C.) is responsible for checking and monitoring production, providing advice and marketing Cognac. Like the producer, it has access to the storage halls with their multiple-locked barrels. If the seals are damaged or removed, the product can no longer bear the label of 'Millésime'. If the quality does not meet expectations after several years of storage, these barrels are returned back to the 'normal' process.

Some whisky friends may find it strange, but the French also have their island cognacs. They may not be directly comparable to the Scottish Islay products, but they do have a maritime character with a slightly salty appeal. On the islands Île de Ré and Île d'Oléron in the north-west of the cognac region, vines are cultivated on nearly 2,000 hectares of sandy and gravelly soil. The main variety is Ugni Blanc, which delivers a slightly sour base wine for distillation that is light in alcohol.

Cyrill Camus, president of the cognac company of the same name, is a partner in the Cave Coopérative des Vignerons de l'Île de Ré, which produces three different island cognacs for Camus. The cooperative itself also distils a cognac XO, which is matured for a minimum of 10 years. The "flagships" of the island cognacs are: Camus Île de Ré Fine Island Cognac, Camus Île de Ré Fine Island Cognac Double Matured and Île de Ré Cliffside Cellar. The signature of these products is shaped by the exciting interaction between the concept and the spirit behind them, the soil and algae, air and sun, sea and Mediterranean climate.

The Camus Île de Ré Cliffside Cellar must be highlighted, where the benefits of nature and the masterly handcraft of distillation and blending have been captured in a very special way. Double Matured describes the concept of the ageing of the cognac. The cellar master puts together a collection of suitable brandies, which are first stored in traditional barrels in the cellars of the Coopérative, until the standards of an island cognac have been reached. Then the "turbo" is turned on, in the form of further storage in the cellars of the tradition-seeped Fort de la Prée from the 17th century, directly on the shores of the Atlantic. There, the barrels come into contact with the salty-wet sea air which contributes to the optimal maturity and special character of the cognac.

The idyllic island - also a holiday residence of many Parisians - is connected to the mainland and the town of La Rochelle by an impressive bridge. Until it was discovered by tourists, the island was an insider tip, also for many artists. The main town on the approximately 30 km long island is Saint-Martin-de-Ré. Around 70 kilometres of sandy beaches, great cycling paths and the special flair of the small fishing and port villages delight visitors.

Everything the islanders (also called Rétais) need to live comes from the island. The microclimate is perfect for winegrowing and other agricultural products. In salt gardens the coveted Fleur de Sel is collected. Fishing and oyster farming can also be found here, Didier Fournier being one of the most famous farmers. 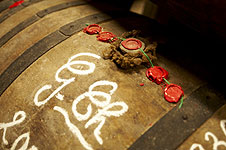 Cognac cannot be sold before it has been matured for 2 years - calculated from the end of the distillation process (1 April of the year following the grape harvest). Before 1 April, the product is given the class 0 and after this date it becomes class 1. The age labelling of Cognac refers to the youngest component in the blend; the quantity and age of the 'mature' components are not defined.

Glass tips
Wob-Edel, WOB-Cognac, WS 18.5
One thing should be remembered here: no snifters - they are out of fashion!